My name is Koji Yamada.

I have been working in fashion for many years in Tokyo.

Currently, as a fashion analyst, I mainly work on blogs and publish books.

In this blog, I will introduce the fashion of Tokyo that I love and the food of Tokyo.

Thrift store in Shimokitazawa that is easy to enter and easy to choose from.

The stage for the second Dig is Shimokitazawa.

Due to the recent secondhand clothing boom, the number of thrift stores has greatly increased in Shimokitazawa.

This time, since I personally needed to "get a couple of reasonably priced T-shirts," I picked out 12 of the thrift stores in Shimokitazawa that I went around to research as well, and picked out the ones that are easy to enter and select for beginners in Shimokitazawa and secondhand clothing, and relatively affordable as well.

First, let me introduce you from the direction of Shimokitazawa Station South Exit.

Walk down the shopping street with McDonald's at the entrance, and the first used clothing store that appears is Desert Snow Shimokitazawa Store No. 5. 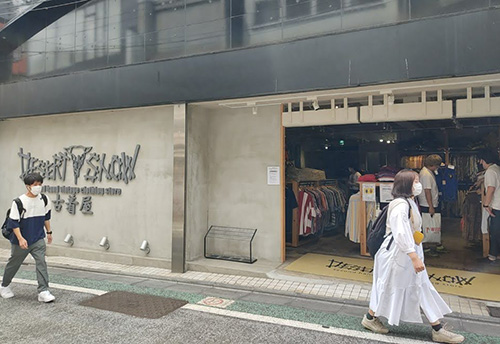 Desert Snow is a thrift store with its roots in Machida, but now has six stores in Shimokitazawa alone.

Although thrift stores may give the impression of being chaotic, all Desert Snow stores display shirts by brand, such as Ralph Lauren, Nautica, Tommy Hilfiger, etc., making it very easy to find the item you are looking for.

Further along the shopping street from Desert Snow Shimokitazawa No. 5 is the Nishi-Kaigan ANCHOR Shimokitazawa store. Inside this spacious store, which is evident from the size of its frontage, you will find a large selection of secondhand clothing at relatively reasonable prices, even among the thrift stores in Shimokitazawa. Although the items are displayed by item, they are not separated by brand, as is the case at Desert Snow, so you can enjoy the sense of treasure hunting that only a thrift store can offer. 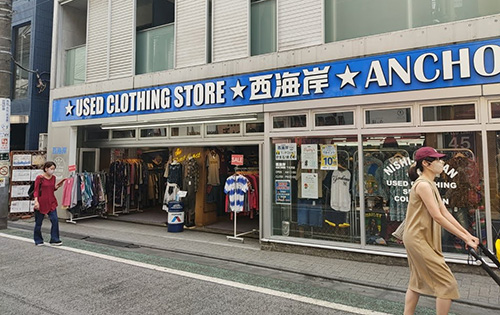 Nishi-Kaigan is a thrift store based in Fukuoka. The company operates nationwide, from Tohoku to Kyushu, and recently opened a two-floor store on the former Samantha Thavasa site on Meiji-dori in Harajuku. 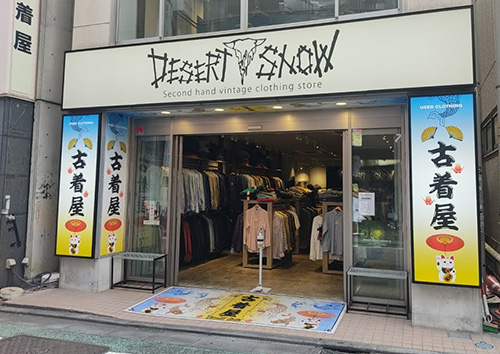 Continue further down the shopping street and turn left at the street where Gyoza no Ohsho is located, and you will see Harajuku Chicago Shimokitazawa. It is a pioneer of thrift stores in Tokyo. For me, the atmosphere and selection at Harajuku Chicago is the standard for American thrift stores. 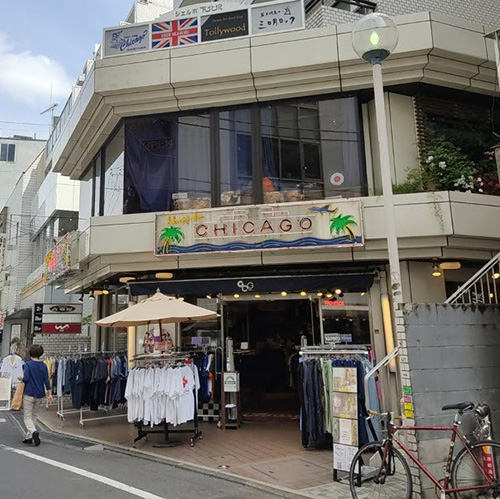 Including this Shimokitazawa and the three Harajuku stores, I believe Harajuku Chicago is the thrift store where I have purchased the most secondhand clothing in Tokyo.

Return to the Gyoza no Ohsho street and turn right at the corner past the Don Quijote Shimokitazawa store, which appears as you proceed along the street where CoCo Ichibanya is located, and you will find the Trefac Style Shimokitazawa store. Like other Trefac Style stores, it mainly sells brand-name items and regular used clothing purchased in Japan, but the area immediately inside the store is a corner for American used clothing. 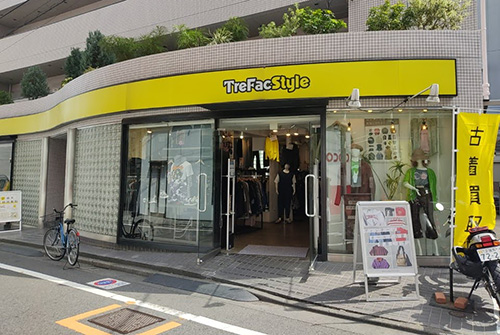 Back on the street where Don Quijote is located, turn the corner with the game center, and take the small street on the left to find KINJI Shimokitazawa. KINJI is a thrift store based in Osaka, and also has a store in Tokyo on Meiji-dori in Harajuku. The store also buys and sells secondhand clothing, with a wide variety of brands and designs lined up in its spacious interior. If you are serious about digging, you will need a lot of time. In fact, I spent a considerable amount of time here at KINJI Shimokitazawa digging for T-shirts. 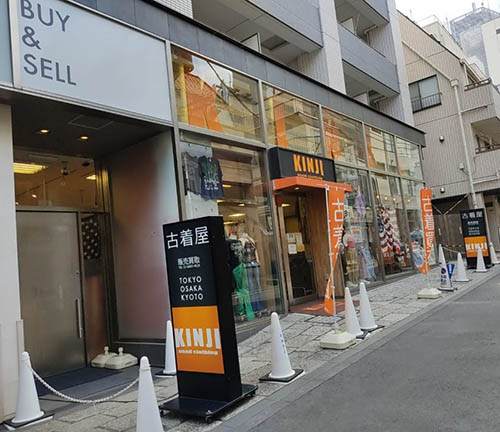 Go along the path diagonally in front of KINJI Shimokitazawa in the direction of Shimokitazawa Station, and you will see the recently opened Nishi-Kaigan ANCHOR Shimokitazawa No. 2 on your right hand side. 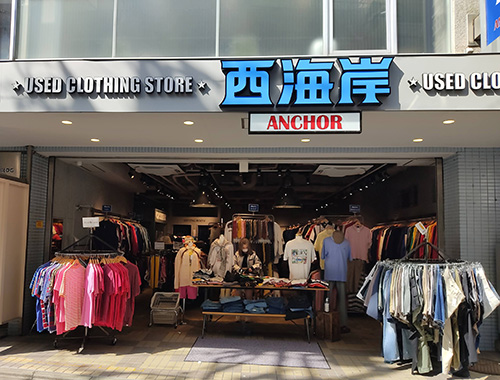 This is another new store that has recently opened.

Next, the North Exit. Exit Shimokitazawa Station East Exit, turn left and go down the street with the Peacock supermarket on your right, and at the end of the street, turn right and you will find Desert Snow Shimokitazawa No. 4. 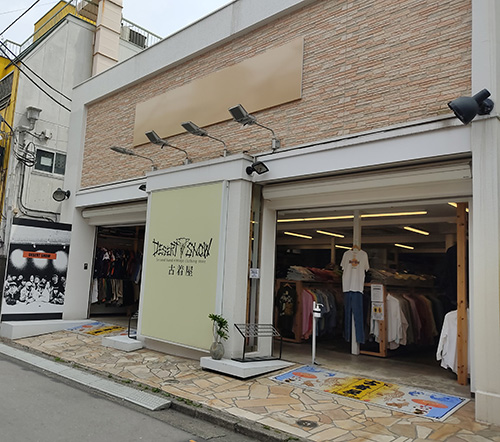 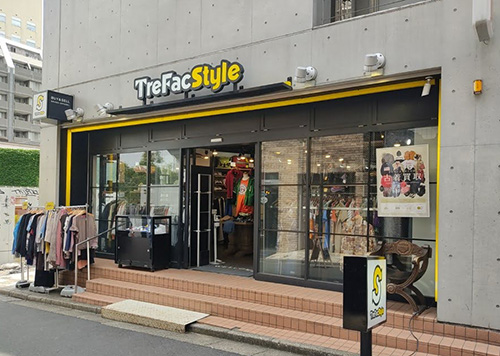 From here, it is a bit longer than before. Heading back toward Shimokitazawa Station, turn right at the street where Yoshinoya is located, and walk up the narrow slope to see Desert Snow Shimokitazawa No. 2. 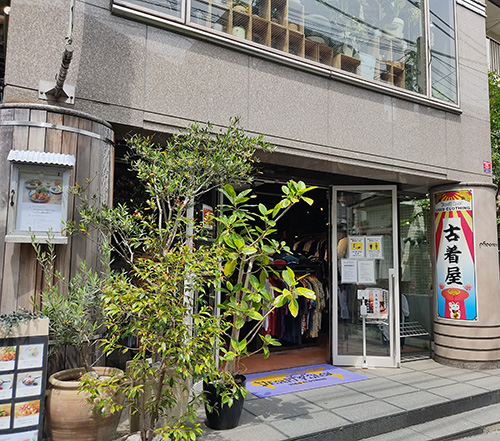 A little further up the hill is WEGO Shimokitazawa. This store is one of my personal favorites among those introduced here. Like other WEGO stores, the spacious interior has some original new items, but most of the selection is secondhand clothing, and the quantity is quite large. The products are divided by taste, such as character items and sports items, making them easy to look at. Not only reasonably priced used clothing, but also T-shirts priced at several tens of thousands of yen per piece are lined up, so sometimes I am surprised to see the price tags, lol. 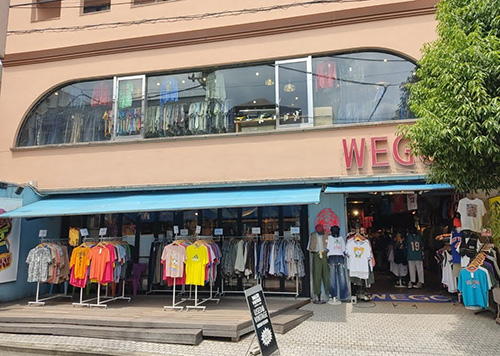 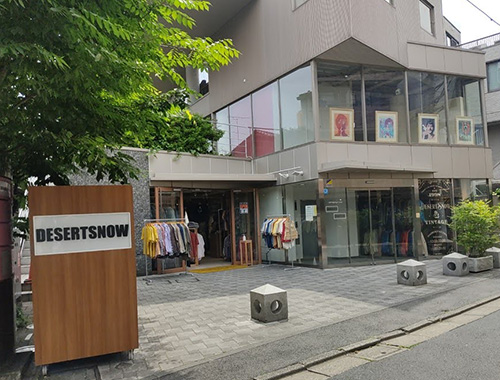 This time we visited Shell noodle Mikawa for lunch. 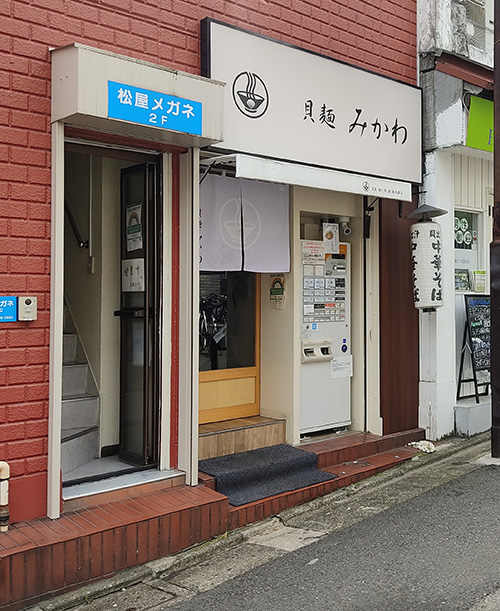 As you can tell from the name of the restaurant, it is a ramen shop that serves ramen with shellfish broth. I have been completely addicted to shellfish broth ramen ever since I first encountered it at Kaika-ya, a Chinese noodle restaurant in Shinjuku.

I had been curious about shell noodle shop Mikawa in Shimokitazawa for a long time, but I had missed it because there was often a line when I passed by the restaurant at lunchtime. On this particular day, however, there was no line and I was able to easily enter the restaurant. 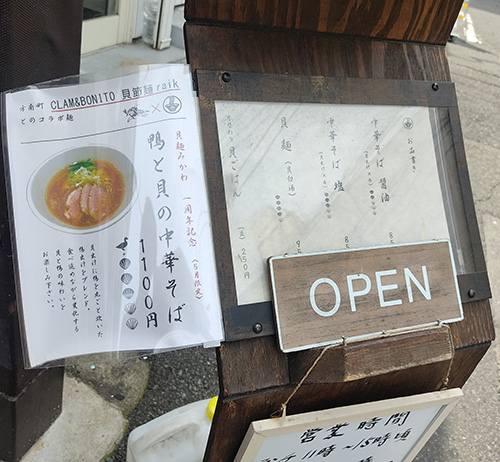 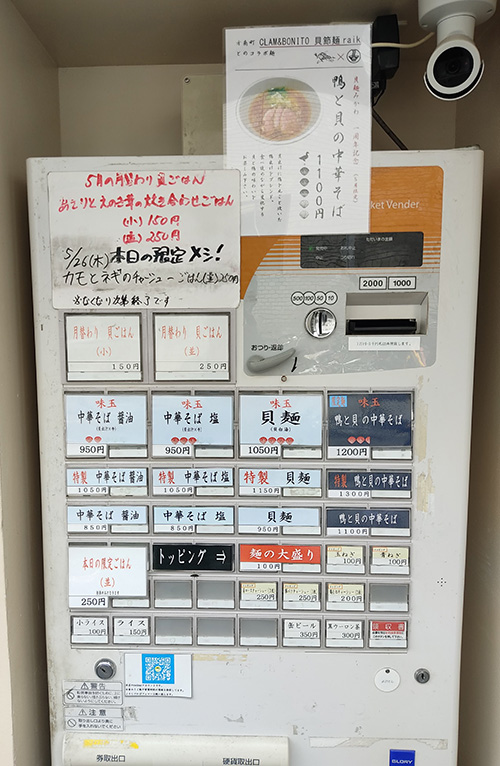 An introductory note posted on the seats. The owner of the restaurant was the head chef of a Japanese restaurant in a hotel in Fukuoka. 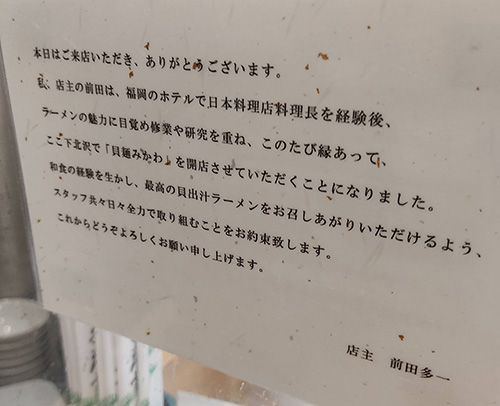 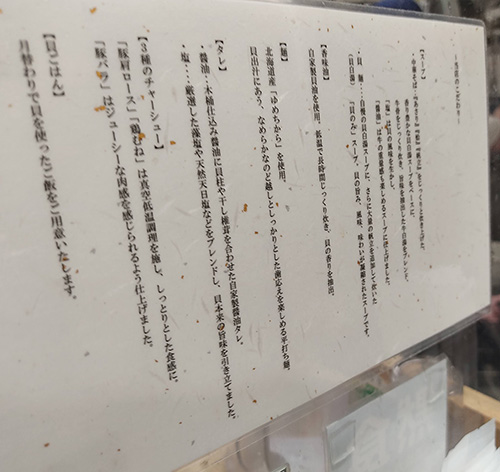 Is it because it is in Shimokitazawa? The seat next to me was occupied by a stylish girl, which is rare for a customer of a ramen restaurant. The "Chinese Soba Shoyu" arrived. I think that ramen noodles topped with purple onions are never a disappointment, and this one exceeded my expectations. This was so good that I wanted to wait in line to try it. 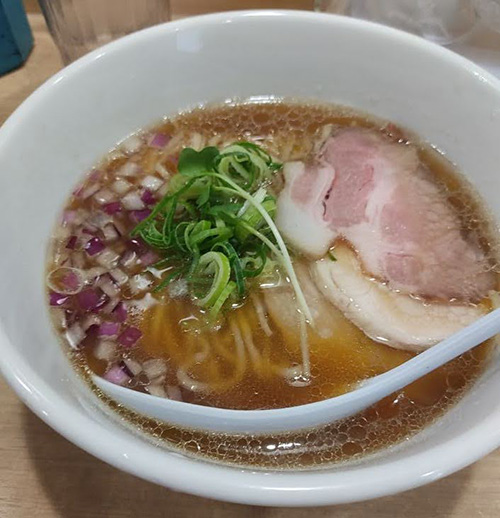 Wet wipes provided at the seats are also a nice touch. 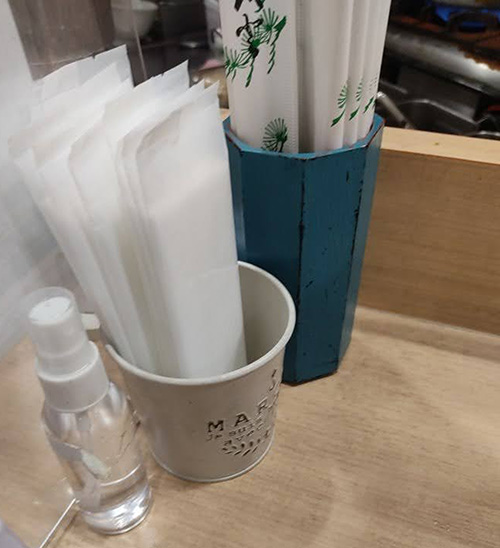 I would definitely revisit the restaurant in the future and try the other items on the menu.

« Shopping without getting wet in the rai… From Nishiogikubo to Kichijoji. secondh… »
Category
Search
Recent Entries
Archive

Login to quote this blog

You cannot quote because this article is private.